Today the schedule called for a comfortable 14-15 miler.  Conveniently, the Borderline Running Club's route for which I was a RWOB (Runner without borders) included the last three borders I needed to become a member on a 14ish mile route.  I also was up for what my friend Thor calls a "social run": stories and good people.  I had done my last few runs alone and well, they were kind of lonely so I was looking forward to running with a good crowd.

The run started out bright and early which I have a love/hate relationship with.  I love being done with most of my Saturday untouched but don't like the early wake up.  My friend Hank picked me up at 6:15 to get to North Andover by 6:45 am where we were greeted by a bunch of BRC members ready to go.  A lot of them knew today I'd complete my borders and said so which was nice.  A note about the weather: yet another Saturday with highs in the 40s - I thought I'd dressed appropriately but nope, was sweating by the end - I won't lie, even though my husband is dying because we're not having a ski winter - I'm loving this mild weather!

Well, the course was brutal.  I sit here a good 6+ hours after finishing and my butt is kicked.  It was just over 7 miles out/back, water stops along the way and LOTS of rolling hills.  My friend Meg said over and over "I have no problem with hills".  Lately, I've been trying to figure out how I can like hills more.   They're critical part of training but 1) I'm not good at them and 2) I don't do well with things I'm not good at.  Nonetheless, it was nice being with a group of people for the long haul and getting the S. Andover, Middleton, and N. Reading borders to complete my 8 borders to be part of the Borderline Running Club - they're a nice group of people who like to drink beer.  Can't go wrong.

The best part: I got an even member number.  You see, the BRC (as opposed to the Goon Squad where you get quirky random names like mine, OCG - Obsessive Compulsive Gina/Goon take your pick), makes your member ID the # member you are.  TECHNICALLY - I am the 41st person to complete all of the borders.  However, knowing this ahead of time, I whined to one of the members that I really love even numbers so if there was someone else that could/would get inducted with me, I'd rather have an even number.  There is just something about odd numbers in life overall- I just don't like.  For example, I do get a minor wave of anxiety waiting to see what number bib I get for a race - I rather noticeable sense of relief washes over me when the bib number is even versus if it's odd, I'm kind of disappointed.

So at the conclusion of the run where I was to get my official BRC t-shirt, this member Matt cited a technicality that my friend Hank, who had completed his borders a few weeks earlier hadn't gotten his t-shirt that day and since I came in before him today, I actually got Member #40 and Hank, #41 (prearranged with Hank who agreed to sacrifice his true number - thanks Hank!!!).

As a side, I was dying for this run to be over today.  Just a hard training week and I'm beat! (also note to self: Jet Blackberry Gu - so gross) I got it done and also became an official member of a great group! 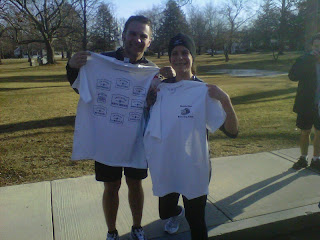