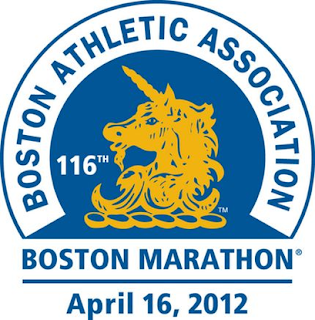 Today was my first day being a spectator in the Boston Marathon crowd.  What a day really.  The record heat was unbelievable but given the warm winter we had - it could have gone either way right? It could have went this way or it could have been a threat of a blizzard - no one knew what to expect.  I had a lot of friends running today - some very seasoned runners and some it was their first marathon.  I was excited for a lot of reasons to be on the other side today.

My plan had been all along not to run Boston this year; I'd like to do something in the fall and didn't want to have to wait to recover from Boston or even deal with any lingering fatigue from it.  It was a good thing I didn't sign up.  Although it's tough because it's the hometown marathon and a lot of people seemingly don't understand that there are other marathons in this world, it was in the end the right choice.  If I was able to run today - it really wouldn't have been worth it- I wouldn't have been in good shape, I would have risked re-injuring myself and I would have had to combat a day like today.  The right choice was made and that felt good.  It also felt good just to hang out with my friends, scream and clap my head off and just take in the scene of the race.  Boston Marathon is just plain awesome.

I have a tremendous amount of respect for those who ran today.  One can argue that anyone can run a marathon in ideal conditions but I think it takes a really strong person to persevere though a day like today.   I really felt motivated by watching all walks of life push on through out there today - congrats to all of the runners who finished or even ran today - totally inspiring!
Posted by Gina Newton at 3:46 PM