My running really started with the 2003 Melrose Run for Women.  My husband and I got engaged in the summer of 2002 and due to financial reasons, had to plan our wedding for 2004.  In the winter of 2003, I looked at myself and said I really want to get in shape for my wedding.  I was never really overweight but I wasn't in that good of shape either.  I danced for 9 years, played baseball, pop warner cheerleader but never thought of myself as an athlete.  Further, through the college years came drinking, smoking *cringe* and poor eating habits.  In 2003, I was going to the gym but not really sure I wasn't making any sort of headway.

In the winter of 2003 going to the gym, I told Jay I wanted to get rid of this chub on my hips.  He said "Why don't  you start running?".  I thought he was ridiculous.  I hated running, I was not a runner and was never going to be a runner.  However, it was worth a shot because I really hated this hip chub. :)  I started running as much as I could on the treadmill- a little here and there but I wasn't really convinced it was something that I'd stick with.

One night I walked into the locker room at the gym and there was a paper flyer for the Melrose Run for Women.  This was about February and the race was in May.  I picked it up and signed up to keep myself committed.  Well I ran the race that year and for the years to follow with the exception of 2008 (I was training for the San Diego Marathon and had a 20 miler the day before - in retrospect I should have just run it but lesson learned) and last year, 2011 when I was very injured.  I recalled today how a year ago I was freshly dealing with my tibial stress syndrome and I couldn't run for 1 minute - nevermind this 3.5 miler.

Well I've run a lot of races since 2003 and have gotten very competitive.  I had a good long stint of healthy running and then have documented in this blog how starting really in April 2011, trouble with injury.   I just spent from February 2012 to April 2012 in physical therapy trying to recover my tibial stress syndrome issues that never really resolved from last year.   Joyfully, within the last two weeks, I must have tweaked something in my butt - yes a pain in the a$$ which evolved into a very painful ache while running.  Within the last week or so, I was really starting to be just depressed.  Maybe I'm never really going to be able to be the runner I want to be I thought to myself and well, I started to belief it.

Yesterday, one day before race day - I usually don't drink.  Well, I just wasn't that into this years Melrose Run for Women - I had planned to run it just to be with my friend but knew I wasn't going to do anything.  You see, I really wanted to win this race at some point - it would really just be so wonderful to win the race that really lured me into the world of running but as of yesterday, this wasn't going to be the year.  Further, while finishing PT, my PT girl said to me "You can run the MRW but you're not going to win it this year".  Okey dokey.

This morning I dragged myself to the start.  Jay looked at my face and asked me what was wrong - "I'm just not that into today".  I drank coffee.  I NEVER drink coffee because it upsets my stomach so much and usually I plan on running so hard that would just push me over the edge (the bathroom edge).  So I drank my coffee.  Well I got plenty sick before the start.  I met up with my friend Sue and my friend Linda - both wished me luck, Jay wished me luck but well.  I didn't expect anything at all.

I went to the start and my heart started pounding like it always does - I guess it's just the electricity of the start.  I ran off from the start for a few minutes just to get my legs warm so I wasn't going zero to fast but nothing too long.  I came back and they walked us to the starting line.  My friend Linda yelled "where is my girl - I know what's going to happen after the gun goes off" - Not really - again, I had no goals - I didn't I had anything in me.  There were even two girls ahead of me who asked if I wanted to go in front of them and I said "Nah, that's ok".  As we lined up, I noticed a masters women who I was familiar with - I mean really familiar with.  She took the Thanks4giving 10K female win away from me in 2010 and it really burned me.  I just looked at how jazzed she was and once again she'd beat me out.

The race starts and we're off.  To my surprise I was behind the police escort along with this master's women "T" and two other women - another master and another girl a bit younger than me with headphones (as a side, as a former headphone wearer - I get it but trained myself off of them and man, do I wish other people would too - they are unsafe and you really have no idea what's going on around you - ok- I'm done).  Even where I was, I thought in my head "there is no way I'm staying here".

The course is not an easy one.  Lots of rolling hills- so big up hills, a big screaming downhill and lots of broken street in between.  We went up the first hill and I think at that point, we lost to the other women so it was "T" leading and me.  I was close to her but not too close.  Again, I kept thinking - there is no way I'm holding this.  I was kind of dying.  I felt like I was going to puke, breathing hard, feeling low on fuel - but I kept going.

Between Mile 1-2 there is another small up hill and then a straight away - I stayed close to "T" and kept thinking - again she is going to beat me, but man, I'm in second - that's great - I was happy.  Between Mile 2-3 there is a SCREAMING downhill and I thought I'd gain on her but she kept it going faster down that downhill - I'm always cautious on the downhills always feeling like I'm going to fall and do a somersault over and over.  There were several times where I was REALLY close behind her but I refused to pass her.  If I passed her and she passed me, it was diminish my confidence and any chance I might have of winning would definitely be gone.

Jay was at Mile 3 and I could see him from the distance and I could see via his body language that he looked, that it was me and just started laughing when it was me that was rivaling for 1st and WHO I was rivaling.  We rounded the corner for the final stretch and there is one last uphill, a straightaway and you come into the finish.  It was on this uphill that I passed "T" and I was in first place.  I couldn't believe it.  I couldn't believe I had a chance at winning this race - as I made it through the last .5 mile my friend Linda came out into my view and was screaming at the top of her lungs "GINA!!!!!!" - I finished.  I won.  Wow.   The race that sucked me into the world of running, that lead me to 8 marathons and countless races, I had won and my goal had been complete.  I couldn't be happier.  My hope and inspiration has been revived and I am thankful.

The best part is that my body feels great and I've gotten the shot in the arm I needed to get me psyched for the 2012 season.  Thanks to all of those that I run with (and that I don't run with) that have supported me through injuries and will continue to listen to me through the 2012 training season! 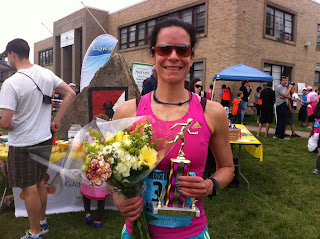